A screenshot of the upcoming iOS 4.3.1 has been leaked. According to BGR, upcoming iOS 4.3.1 will bring battery life improvement, Baseband updates for the iPhone 3GS and iPad, and bug fixes. It has been tested by someone inside Apple. iOS 4.3.1 for iPhone 4 will be released within one to two weaks. It will also patch iPad 2 jailbreak venerability. The full change log for iOS 4.3.1 is given below. 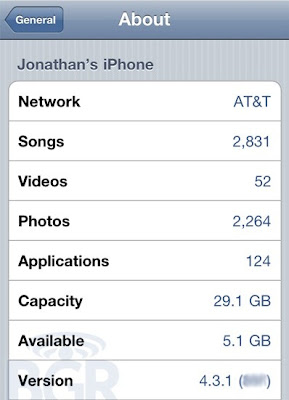 Currently there is no information availabe whether iOS 4.3.1 will bring Verizon iPhone 4 users on the updated 4.3.x firmware version or not. Also Apple has released iOS 4.2.1 (iOS 4.3.1) for Apple TV 2G. So we are expecting iOS 4.3.1 will be released by this weekend.

Btech Student
View all posts by nonerox →
This entry was posted in iOS. Bookmark the permalink.